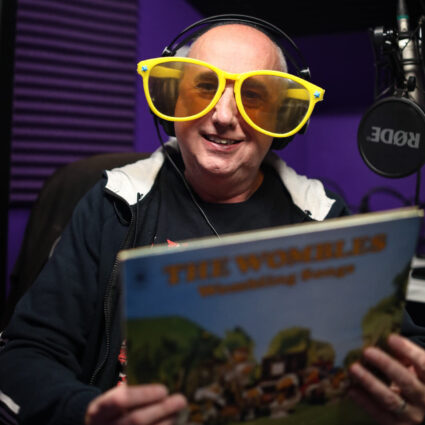 When I was created in 1963 Gerry and the Pacemakers was number one with I Like It, and bloody Manchester United had won the FA Cup, so things could only get better for me,

Music was always a big part of my life, but the first records that I had were by T Rex, Slade, The Osmond’s and David Bowie. 1973 was a great year: Sunderland won the FA Cup, Glam Rock was massive and I had a Chopper bike! Could life get any better? Fast forward four years 1977 PUNK ROCK, yes life could get better. I fell in love with the music, the fashion, John Peels show, gigs and I left prison,  (I mean school), In 1979 I ran away with punk rock and lived happily ever after!

I  was a roadie for Nuneaton rock legends Firebrand and started putting gigs on at The Crown, (in Nuneaton), in the early to mid 80s. I drove GBH to Holland for gigs, became Raggity Anne’s booking & road manager, started putting gigs on at The Caddy Club (Nuneaton), which became one the venues bands at the time bands really wanted to play – from the new emerging UK punk scene. I became Effervescent’s manager, toured with Less Than Jake, Teen Idols and Allister, and I have been very lucky to have met so many great bands and great people – many of who I am still friends with to this day. I first meet my wife at a gig, so I think you can tell after reading this that I quite like my music!

1. Sex Pistols – Never Mind The Bollocks
2. Ramones – Leave Home
3. The Clash – The Clash
4. GBH – City Baby Attacked By Rats
5. Toy Dolls – Dig That Groove Baby
6. Anti-Nowhere League – We Are The League
7. Dropkick Murphy’s – Blackout
8. The Wildhearts – Earth vs The Wildhearts
9. Bombshell Rocks – Cityrats and Alleycats
10. The Apers – You are Only As Strong As The Table You Dance On

It started with Black Sabbath, Led Zeppelin and Deep Purple from dad's records and 8…

Jake Mendham. Born December 13th on a Friday... I got into music by a show…