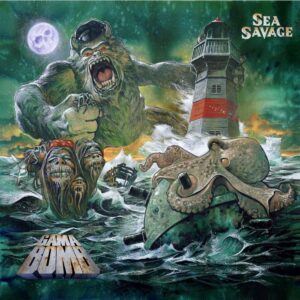 Gama Bomb is a band from Newry and Dublin, Ireland and was formed in 2002. They are Metal with a capital “M”. Thrash styling with a tuneful vocal range and a bloody great drummer. Actually he’s new to the line-up for this album, as long-time drummer Paul Caffrey has now been replaced by James Stewart. So far they have managed to create 7 studio albums, with this new one being the lucky number 7. Each one has been a little bit, shall we say, quirky? This one is no different, but isn’t quite as full of noise as some of the previous outings.

The band has built a reputation of tongue in cheek or just simply silly lyrics, mixed with a thrash sound and decent vocals. This album seems a little softer than some of their previous work, but that doesn’t necessarily make it worse than what has come before. In fact, the slight change in sound does make it a little easier to make out the lyrics, so I shouldn’t complain.

Truth be told, the premise of this album is undefinable to me, but that isn’t a bad thing. Apparently it’s a story about a group of people who go to sea in search of a Yeti and all lose their minds. Why they might think they could find a Yeti at sea is the confusing part, but who said an album had to make sense?

All of the songs are good, but not one of them is what I would call outstanding. However the drums are bloody amazing at times and the vocals are diverse and dare I say humorous. Philly Byrne shouts and screams his way through many of the songs and the bass lines from Joe McGuigan, and backing vocals, are pretty damn slick. So too are the guitarists Domo Dixon and John Roche, who offer up some nice precise guitar play that belies the speed of some of their tracks. Check out the title track if you don’t believe me.

It feels at times as if the band doesn’t really take itself seriously and I like that. Too many bands overdo it nowadays and I am happy to say that’s not the case here. There’s no over production and the band just get on with and do their job. This is one of those albums you can just put on and head bang to without worrying too much about the meaning behind each song.

With titles to tracks like “Ready, Steady, Goat”,  “Judo Killer”, “Monsterizer” and “She’s Not My Mother, Todd” you might think the band were taking the piss. This may be true but the quality of the musicianship and vocals would have you believe otherwise. My only complaint is that the quality of the recordings / mix is not consistent on all of the tracks, but as I understand it the album was mixed and recorded in quite a few separate locations throughout the year. Understandable when you consider the year we have had.

If you can get past the subject matter, then this is an entertaining album and as a thrash metal offering it doesn’t disappoint. It’s a mad 7/10. I would have scored it 6.9, but it was just too much damn fun.