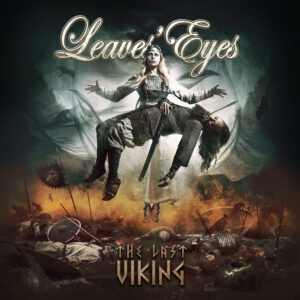 Leaves Eyes, if you didn’t know, are a symphonic Viking metal band, with great vocals, soaring guitar solos and a mix that wants you to let your brain disengage and just listen. Honestly, if I was still able, I would have been doing sword kata to most if not all of their songs. It’s music on an epic scale. They hail from Germany / Norway / Finland and most of them have been together since 2003. Basically, you can tell. Their whole performance is tight to the point of perfection.

In the past Leaves Eyes have covered such topics as the first Viking to find America and chronicled the life story of the first Viking King, so it makes sense that they might write about the Viking invasion of Britain in 1066 and the death of Harald III, the supposedly last Viking King who died at the Battle of Stamford in 1066. That is the story behind The Last Viking.

So is the album up to such an epic tale? Oh yes, it most certainly is. It is melodic, dramatic, and vocally superb, with soaring highs, choral backing, subtle orchestration and some of the best guitar, bass and drum work of this genre. Extreme metal vocals mixed with the clarity and voice of lead singer Elina Siirala just energise the brain. Elina took over from previous lead singer and band co-founder Liv Kristine in 2016. She is a soprano and what a voice she has! But having such a voice would be for naught if the rest of the mix wasn’t up to the job. Luckily, or by design, it is a great mix.

The Last Viking, the penultimate track on the first CD, is my favourite. Its great intro and mix of traditional harsh metal vocals mixed with the operatic voice of Elina makes for a great song. Especially when the pace changes during the track.

Whether you enjoy this sort of music or not there is a real power to this album that keeps you listening right to the end, then when you have learned all the lyrics you can get the second CD out and listen to the tracks without vocals. Great for those heavy workout sessions or when you want some decent background to your favourite epic computer game.

Can you tell I enjoyed it?

With fantastic vocals, great instrumentalists and a wicked mix, this is one of the most melodic symphonic metal albums I have listed to these last few months. I really enjoyed its story and the mix of classical and metal styles. A massive warrior destroying 9/10.

If you liked this review check out our social media links for future and past reviews.