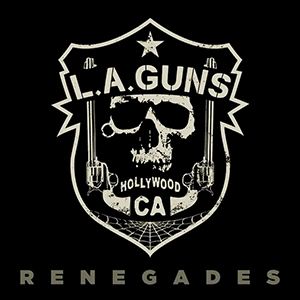 Once upon a time there was a band called L.A. Guns that merged with a band called Hollywood Rose and formed a band called Guns ‘n Roses. The original lineup of that band was composed of Axl Rose, Tracii Guns, Izzy Stradlin, Ole Beich and Rob Gardner. However, Tracii Guns left the band and was replaced by Slash. Whilst this was all going on, the original members of the band that had been left behind eventually reformed L.A. Guns and continued making albums. This was further complicated when Tracii Guns, reformed his version of L.A. Guns too. So which version of the band do we have here then?

Well, the current line-up includes Steve Riley, Kelly Nickels, Scotty Griffin and Kurt Frohlich on both lead vocals and guitar. If that isn’t confusing enough Tracii Guns L.A. Guns still exists and is suing them for using the name. It’s not my job to judge, but if you leave a band and form a brand new one you shouldn’t then come back and expect to use the same brand name. But, let their lawyers sort it out. Meanwhile we can listen to the Steve Riley version of the band and their new album Renegades.

First thing to say about this album is that it feels like I am going back in time. This is classic rock in the Californian rock style. By classic I don’t mean old either. I mean it’s a classic. The sound is tight, the vocals are flawless and there is literally a song for every energy level. Whether you want to listen to a decent hard rock bash like “Crawl” or a slightly quieter acoustic led song like “Would”, you won’t be disappointed. Their single release, “All That You Are”, combines Californian classic guitar tones and some decent lyrics into a quick paced production that has you tapping your foot in no time.

This is how an album should be put together. Different song pacing, varied guitar work and great vocals and drums make a great collection of songs that I can listen to again and again. It’s great that so many rock albums have been released this year and even better that they are in so many diverse rock genres. Some may say this group’s sound is stuck in the past, but I say it’s timeless and you should consider this version of L.A. Guns to be the real deal.

This outstanding selection of 10 songs deserves a hard rocking 8/10.