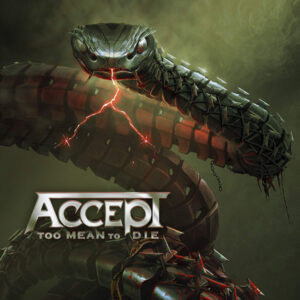 German rockers Accept are back with a new album, but does it live up to our very high expectations? Read on and find out.

Without being impolite, Accept have been around for roughly 45 years. Still in the top tier of metal bands, always providing a consistent and measured output, they have a reputation as one of the steady hands of rock and metal. Known for great vocals, tight bass and screaming guitar riffs over a solid drum and bass backline, they kick ass both live and on recordings.

Formed by guitarist Wolf Hoffmann in 1976, the current line-up consists of Hoffman, vocalist Mark Tornillo, guitarists Uwe Lulis and Philip Shouse, drummer Christopher Williams and bassist Martin Motnik. Hoffmann is the only constant band member since its creation, and he is the only one of the band to have appeared on every one of their albums.

On this new release they are being produced by Judas Priest guitarist and producer Andy Sneap and he has truly invested additional tonal changes into some of the tracks. There be magic here.

This is their sixteenth studio album and offers up more of the energy that made the band famous all those years ago. This energy does not seem to have been dulled by age either, as it continues through the whole of the album and keeps you listening and rocking as it progresses onwards.

Their first track, “Zombie Apocalypse”, offers up a tour-de-force of frenetic playing mixed with some subtle tonal imagery that reminds you of Priest. The second track, “Too Mean to Die”, does not let you pause and your head-banging muscles get a decent work-out. “Overnight Sensation” starts with a California rock sound, and espouses the ups and downs of being an Internet star.

Moving on the fourth track, “No Ones Master”, we get a solid and driven heavy rock song which is less frenetic and more impactful. This is followed up by The Undertaker, which wouldn’t be bad as a theme song for a certain World Wrestling star. Next, “Sucks to Be You” turns up the impact and harmonics again with a hard hiding lyric, whilst “Symphony of Pain” kicks you in the crotch with a mixture of classical style riffs and heavy rock tones.

“The Best is yet to Come” calms things down and drops close to a rock ballad style with softer vocals, then pounces on you with a harsher metal tone and vocal. One of my favourite songs 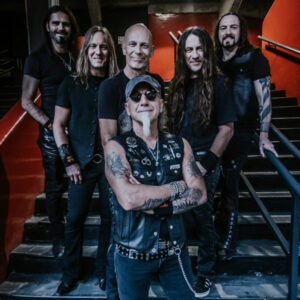 on the album, you can hear this as part of a movie soundtrack.

“How Do We Sleep” once more opens us up to an absolutely epic sound. The drum and guitar intro is multilayered and mixed hard and it is great on headphones. Just nod your head to the tune and you’ll be lost in the song in moments. Epic choral backing for the vocals rounds of this song and makes it epic.

The penultimate offering, “Not My Problem” could be the anthem of any rock bar, with its fast guitar intro that is reminiscent of many a bikers movie. You can feel the road passing rapidly beneath you as the listen to it.

The final song, “Samson and Delilah” is a great example of just how good a guitar can sound. The introduction alone is worthy of constant repeat. I’m going to play this a lot. The whole track is an instrumental and winds in and out of riffs and modal changes constantly. As a guitarist, I loved it – being both awed and jealous at the same time.

This is without a doubt one of the best albums I have heard and I’m rating it a solid 8/10.