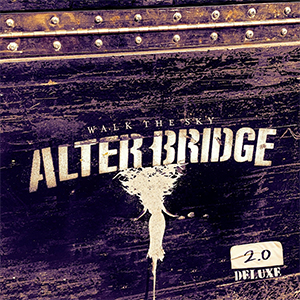 Alter Bridge have released a follow up to “Walk the Sky”, released in 2019 and guess what it’s called?

Okay so “Walk the Sky 2.0 (Deluxe Edition)” is basically a re-release of “Walk the Sky” but with a few extra tracks added in for good measure. I’ve seen this before, when bands want to give their fans something a little extra – or if the previous release had met with a less than favourable reception.

The problem with adding songs on is that you really have to have a good reason to do it, otherwise people will just think you or the record company are profiteering.

I am happy to say that the extra songs do make a difference to what was a good but uninspiring original release. Don’t get me wrong, when you have talent such as Myles Kennedy, Mark Tremonti, Brian Marshall and Scott Phillips then the album is always going to be of fairly decent quality. However, as has been pointed out in many reviews of the bands previous releases, there wasn’t really enough to make the band stand out amongst the plethora of California Rock bands out there. Not since their album “Blackbird” anyway.

Luckily, Alter Bridge did the one thing that is guaranteed to make fans happy, they added in a further 6 live versions of tracks that were already on the album and an extra track that they recorded this year. “Last Rites” is actually a damn decent rock song and puts many of the previously recorded songs to shame. It seems more solid and has a better mix. The live versions of the songs on the album are also a good choice. In fact they are an excellent choice because they prove just how effective and different a song can be when performed live on stage.

My favourite songs on the album are both versions of “Native Son”, “Last Rites” and “Dying Light (Live)”. The music is a cross between solid rock and heavy metal, so it should appeal to both genres. Honestly, I am only on my third listen of this album now and I’m appreciating the music more and more, so maybe I will be able to add more to this list in the future. The whole album has a very good vibe to it, reminding me of Creed. Alter Bridge was formed from the embers of Creed, so that cannot be a bad thing – unless you disliked Creed of course.

In conclusion, this is not the best album the band has ever made, but it is a solid performer that offers up many repeat listens, and that cannot be a bad thing. It is a far better value proposition than the original album though, offering up 21 songs in total. It’s not awe inspiring but in my humble opinion offers up a solid 7/10.

The album is available to order online now, and if you are a fan of the band I would recommend it over “Walk the Sky”. If you have already got “Walk the Sky”, then get this for the live versions. It’s worth it.