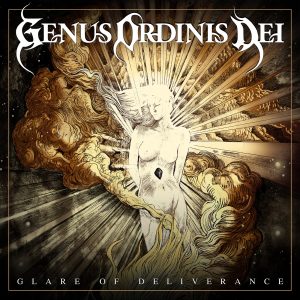 Genus Ordinis Dei – Glare of Deliverance is not just an album release. It is a complete sound and visual experience.

Formed in 2011, Genus Ordinis Dei is not your normal metal band. They claim to be a symphonic metal band, but although there is a lot of orchestration in their songs, it is less symphonic and more epic in flavour, especially with this their latest offering.

The band hails from Italy and all 4 regular members are graduates of some of Italy’s greatest music academies. So what does this mean for this album? Well, it is more of a musical metal score for a movie than a metal rock album. Epic really is the watchword for this type of music.

The album has deliberately been constructed to tell a story and it does, capturing the journey of a young woman called Eleanor who is caught by the inquisition as she performs a ritual. This story is told in ten tracks entitled; Ritual, Hunt, Edict, Examination, Torture, Judgement, Dream, Abjuration, Exorcism and Fire. Fire is the longest song on the album and comes in at an impressive 16 minutes and 7 seconds in length.

Each one is being released with a corresponding video which serves to add to the story visually. Let’s get this straight, these are not just music videos – they are chapters in a short metal movie. So even if you don’t get the full scope of the story by listening to the album, you can actually watch it unfold in the videos.

Before I started listening to this band, I hadn’t really heard a lot about “Symphonic Metal” and to be honest I probably would not have given it a second look. That would have been my loss. The inclusion of a full orchestral backing, intro or ending to a song makes a real difference – but incorporating an orchestral style into the full structure of the music is truly mind expanding. In this regard, Genus Ordinis Dei has surpassed my expectations. I would love to see them live.

My favourite tracks on the album are Ritual, Dream, Exorcism and Fire. It was hard to pick them above the rest, as they are all good. Don’t take my word for it though. Although the album is released on the 4th December, the first three videos that link to the album had already been released at the time of this review. Check out the links below and search YouTube for more information.