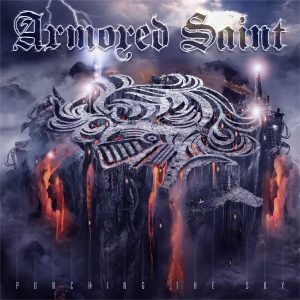 Since they came together in 1982, Armoured Saint has been a leading light of the Californian metal scene.  They broke up in the early 90’s reforming in 1999 and released the album “Revelation” in 2000. Skip forward to 2020 and the band is still going strong and have just released their 8th album, “Punching the Sky”.

What is it about rock and metal albums in 2020? The quality of many of this year’s releases is making it difficult to be unbiased. But why should I be unbiased when an album like this is released. We could wax lyrical about how the band are back to their best, but they’ve been around for so long that anything they do now is so polished to the max. Dare I say, “rifftastic”? This isn’t just an album that they have released here; it’s a lesson in how to do things well.

Don’t think I am saying this because I am a fan of the band either. Truly, I am not an avid follower of the band and to be honest I lost track with them sometime early in the 2000’s, shortly after they reformed. As a consequence I’ve come to review this album with no expectations.

Is it any good? Hell yes, and I could end the review there, but I’m not going to. It’s alright saying an album is good, but people want to know why. You see, it’s one of those albums you just want to put on and play air guitar to. Yes, I know I’m an old geek, I know people use inflatable guitars nowadays, but I don’t think I am wrong.

Justification? Well if you want an album that offers up some great guitar and vocal hooks, with understandable lyrics, this is it. With additional keyboard from Dizzy of Gun’s N’ Roses filling out the backing, the album offers up that classic heavy rock feel with some brilliant guitar. It’s not overdone either. Track wise, I like them all, but I like “Bubble” for its short slightly quirky intro, “Do Wrong to None” for its heavy sound and “Missile to Gun” for its classic heavy harmonic on the lead intro and its urgent pace. “Fly in the Ointment” is one of my top picks but I really cannot pick a favourite. The only track I couldn’t get on with was “Bark, No Bite”. Quite frankly, it just didn’t grab me. It’s not that it’s a bad track, but it didn’t make me want to listen. Go one song further into the album and you get “Unfair”, which caught my interest straight away. Finally look out for the last song on the album, “Never You Fret”. Addictive guitar rhythms and a snappy bass.

Honestly, this is a head bangers dream of an album. If I had a fast car, with big speakers, this would be one of my top car albums. Hang on; did I just class this as a car album? Nooo!

I should add that there is a version of the CD with three additional Bonus Tracks available. As far as I know they are not available on the double vinyl album, but I’m sure that someone will find a version with them on. My review copy did not have these on so I haven’t mentioned them.