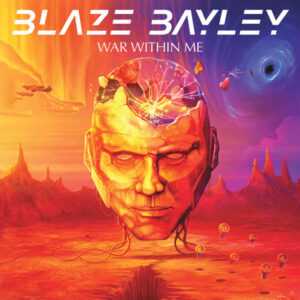 Blaze Bayley has been around for a while. Lead singer of both Wolfsbane and Iron Maiden in the past, he has carved out a heavy rock and metal career that has produced some excellent, if underrated, solo albums. He rarely disappoints and his style has always been full of energy and confidence. Here we have an album that some might allude to some sort of personal battle that rages within Blaze himself. If that’s the case, then this doesn’t come across in the performance.

From the first song, “War Within Me”, we get that confident vocal mixed with lyrics that tend to tell a specific story with each song. We also get lots of metal energy. Fast heavy drums, great guitar riffs and, in the song “303”, what sounds like the engine of a Hawker Hurricane. This holds true if the song is about the famed 303 squadron, one of the few Polish crewed RAF squadrons of the Battle of Britain. Nice to know Blaze is a history buff too.

The third song on the album, “Warrior”, starts with a quieter melodic guitar intro, with some great vocals from Blaze. They kick off soft and melodic, rising into some strong almost operatic notes – showing that Blaze has a great vocal range that isn’t always hidden by the instruments. Then, the song leaps straight into an energetic beat that doesn’t disappoint. Again, there is some great harmonic guitar soloing in this song as well as a strong punchy rhythm.

“Pull Yourself Up” could be a training anthem. Its message seems to be to rise above your fears and join in. However, just when you think the song is reaching a crescendo, it surprises you with a brief interlude and then jumps to a punchy ending. Vocals and guitar build with the drums to a sudden ending.

The fifth song of the album, “Witches Night”, is a solid combination of good vocals and great guitar. Again, it is mixed into the bass and drums in a backing that never seem to falter. This could easily have been a Maiden song with its varying musicality.

I could go on about the thunderous guitar from Chris Appleton forever, but mixed with Blaze’s vocal and some challenging song subjects, he seems to rise to a peak of guitar playing that defies time. This is a partnership that has existed for a while and is showing its maturity. The album is all the better for it and I am a sucker for this style of guitar playing.

Blaze continues through the album with titles that cover “The Dream of Alan Turing”, “The Power of Nikola Tesla” and “The Unstoppable Stephen Hawking”. It finishes with the amazing “Every Storm Ends”.  Where he gets his ideas for these subjects eludes me, but as a science nerd and a rock fan I applaud him.

It would sound rather flat to just say that Blaze Bayley is improving with age, but he is. His vocals seem insanely strong and the mix on this album is just perfect to show them off. They never seem to be lost in the backing and often surprise you with their range. The songs are good too. They show thought in their lyrics and their subject matter. If I was going to choose any song on the album as my absolute favourite, it would probably be “The Unstoppable Stephen Hawking”. It starts with a melancholic yet slightly heroic theme, and then progresses into some amazing guitar that leaps into a vocal that just kicks ass. My second favourite is “Pull Yourself Up”.

I don’t want to give this album a score because I don’t feel worthy of it. But it’s got to be done, so I’m just going to mark it as a 10. Bayley has knocked it out of the park with this one.