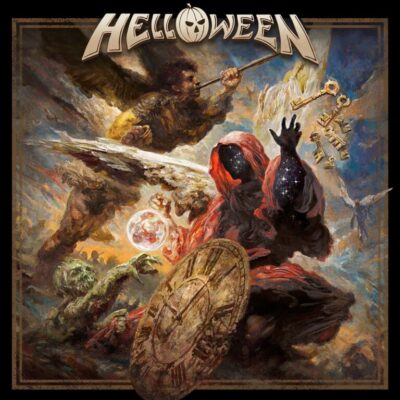 Helloween, I am ashamed to say, are one of those bands I haven’t paid a lot of attention to over the last few decades. I lost interest in the band when the line-up changed. I wasn’t interested in the change of vocalists and like an idiot I thought they had split-up forever.

However, any decent fan of the band, (not me apparently), will now know that Kiske and Hansen rejoined the band again in 2016. To celebrate this they released a new single, “Pumpkins United”, in 2017. Soon everyone was looking forward to a new album, but unfortunately, we have had to wait quite a while to wait for it to appear.

The wait was worth it though.

The self titled new album, Helloween, is as good a “comeback” album as any band could hope to have. Don’t just take my word for it though, as other members of the press and other radio stations are praising it too. It has a maturity that befits a band of this talent and longevity, with an excellent vocal and instrumental mix, (produced by Charlie Bauerfeind, co-produced by Dennis Ward, mixed by Ronald Prent and ultimately mastered by Sascha Bühren). Even the album cover, designed by Eliran Kantor, offers up a classic 80’s rock style that reminds me of the golden age of album cover design.

I wish I could select my favourite track on this album, but as of writing this review I haven’t chosen one. To be honest I’ve listened to the album over a dozen times and this is my third attempt at writing a review. Some have said that this album suffers slightly from the fact that it mixes the vocal and musical styles of Kiske, Hansen, Deris and Gershner, but in my humble opinion the combination is a wonderful hybrid of old, older and a glorious new style that circumvents what you expect. It’s not the best album that they have ever produced but it comes close.

“Out for the Glory” begins Helloween and you won’t be disappointed as It sets a frantic pace. “Fear of the Fallen” starts with an acoustic guitar with softer vocals, which leads you in to a false sense of security, but the track accelerates the pace then switches between slow and fast waves. “Best Time” is anthemic, “Mass Pollution” is fast paced, and “Angels” kicks off with a gentler pace and rapidly cranks up the volume and shifts between tempos. At this point, the album turns up the rock levels until the short instrumental “Orbit.” Then we have “Skyfall,” which mixes the voices of Kiske, Hansen, and Deris to tell the story of an Alien who falls to Earth. It’s quite tragic. The bonus tracks that are available on certain versions of the album are also worthwhile as they include their 2017 single “Pumpkins United”.

All in all this is a damn good album that proves that Helloween is back and kicking ass. I love the combination of old and new vocalists and hope that the band really keeps this as the new frontline.