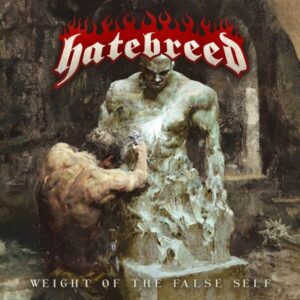 Hatebreed are one of those bands that falls into a specific form of music known as “metalcore”, a cross between heavy metal and hardcore punk rock. Honestly, it’s not a form of music that I had listened to before this review and so I found it quite jarring – at first. You see, I’m a fan of Punk – but not hardcore punk. I’m a fan of metal too, but like many things in life, I had avoided “metalcore”.

Now, I know that many of you will be hanging your heads and saying things under your breath whilst reading this, but the great thing about rock, metal and punk is that there are many different genres that cross over. Not every single genre suits every person. That’s just the way it is I’m afraid. Having said that, I was intrigued enough by the band to learn a little more about them and whilst I did, I kept listening to the new album.

It grew on me.

This is their 8th original studio album since the band formed in 1994. So, in order to last this long, there has to be something about them – right? Well, as it turns out, there is. Their songs are tightly performed, with shouty punk metal vocals that engender philosophical lyrics and subjects that touch on what is happening to people in the world today. It’s raw, it’s heavy and it takes Punk to a new level. Whether it is about emotional stability, self harm, negativity in life or simply holding on to what you value, this album has it all. You don’t even have to appreciate this style of music to appreciate it either.

Sadly, it has taken me nearly ten listening sessions to understand what this album is trying to project, but I think that anyone that follows this genre will appreciate it a lot quicker than I did. It’s not the fault of the album, (or the artists), that it took me this long to get what this music was about. I’m just not used to hearing this style of music. As a consequence, I have nothing to judge it against except punk. It’s raw, it’s in your face and it explodes into your ears.

So now I have to give my point of view even if I’m not ordinarily a fan of this music. I can confidently say that my favourite tracks are “Wings of the Vulture” and “A Stroke of Red” with the latter song taking the edge. That doesn’t mean I feel that the other tracks on the album aren’t good, but these two songs stood out more and I found myself repeating them more on playbacks.

Will I add this band to the many others that I follow? Of course I bloody will. I may not know a lot about this music, but on its own merits this album scores a likeable, ear deafening 7/10. I suspect fans of the band and the genre will enjoy it a lot. I did, it just took a while.

German rockers Accept are back with a new album, but does it live up to…