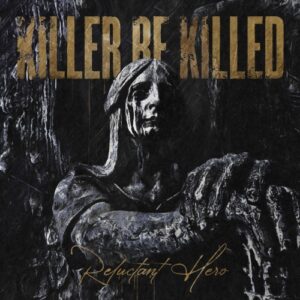 It’s alive! Progressive metal is still going strong and kicking ass. While most of us believers already knew that, it’s nice to have it confirmed with the release of this second album from the convergence that we now know as Killer Be Killed.

Reluctant Hero is the title of the second album from this now established group of talent, which incorporates members of four previous bands.  Max Cavalera, Ben Koller, Greg Puciato and Troy Sanders are no slouches, having come from such bands as Dillinger, Mastodon, Converge and Sepultura. In fact having a drummer and three vocally talented front men takes this group to another level.

Take the title track, “Reluctant Hero” as an example. A slow melodic guitar intro leads into an atmospheric vocal, whilst a haunting guitar plays a simple refrain in the background. Then, from out of this we are led to a defining drum track and this all builds and drops back to a quiet guitar which lulls you into a false sense of security. Then we get an explosion of metallic melody and some great vocals, and this is all in one song.

This group have taken the sum of their combined knowledge, thrown away the useless bits and created a gestalt entity that builds upon a new talent and a varied sound. All of these tracks offer up something different, with varied vocals, different guitar styles and a brilliant bass and drum line. If you like progressive metal, then by its definition, this album is it. It builds upon their previous album, and just takes things a step further.

If you want heavy, heavy metal, listen to “Animus”. It also has a great drum track. However, it flies by at just over a minute in length. Blink and it’s gone. Crazy yet awesome.

As I finish writing this I am on my fifth listen of the album, which like a few I have reviewed this year, teaches you more upon repeat listening. This is a fantastical prog-metal foray, with plenty of variety and a great sound. You’d be missing out if you didn’t give it a listen. A screaming 8/10 for this one.