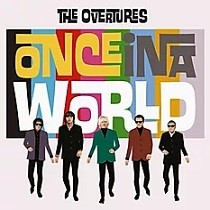 Following the decade that brought us world changing music acts, the likes of which had never been experienced before, such as The Beatles, The Stones and… well there are far too many to mention. Many bands have tried to recreate the unmistakable sounds and feel of that magical era, and quite simply very few rarely do succeed in capturing the true essence of what made the 1960’s music so special.

Back to present day and to a year that most would agree has been less “2020 visionary” and more “steamed up spectacles in a face mask”, Yes, things have been pretty miserable but despite all the doom and gloom a ray of retro light shone out from the darkness in the form of “Once in a world” by The Overtures.

The Overtures are best known internationally for their “Bootleg sixties” tours that trek the world over to bring us all the excitement of the swinging sixties in their elaborate theatre shows that have attracted such high profile fans as, Sir Elton John, Elvis Costello and Lulu, to name but a few.

Not content with just paying tribute to the great musicians of the decade The Overtures also write original material and in February this year they released the album, “Once in a world”, containing twelve tracks that could easily be mistaken for the types of sounds that would have filled the airwaves back when mini skirts and mods reigned supreme.

Staying true to original recording methods and musical styles of the era the album kicks off with a track that wouldn’t be out of place with where The Beatles were at musically circa 65-66. With its 12 string guitar chiming out a catchy riff to complement the close vocal harmonies and ear worm inducing chorus that is instantly unforgettable.

The rest of the album continues with equally catchy tunes and littered with the vocal harmonies that characterised the whole feel that made the 60’s sound so special. Lyrically the album is reminiscent at times of Ray Davies’ social observations and Brian Wilson’s imagery and story telling, that complements the melodic and era distinctive hooks that every track possesses.

For anybody that pines for the 1960’s or wishes they could have experienced the decade for themselves, this album will get you closer to that dream, or if you just love catchy riffs, great hooks and close harmonies then again this album will deliver.

Not a lot of good has come from the year 2020, but the one saving grace is an escape back to better times in the form of “Once in a world” The Overtures.