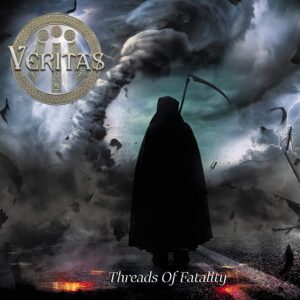 Strangely I hadn’t heard any of the music from Veritas –  so it was with some anticipation that I started to listen to their latest album, Threads of Fatality. Actually, I should correct myself here, this is their first album. They released an EP back in 2019, entitled Veritas, which featured four of the tracks that are on the album.

So what are they like? Well, that’s the surprising thing, they’re pretty good. Their sound is both a mix of prog and classic metal, with vocals that could be easily found on a Sabbath album – or just as easily on a Maiden album. They seem to successfully cross over the two different vocal styles. Guitars are tight, drums are even better, the vocals are not overwhelmed by the mix – but I would have liked to see a little more bass in the mix. Saying that, the modest turn of a knob on my amplifier soon sorted the bass issue. There is no pleasing some reviewers…

Somehow, despite the plethora of new releases that have sprung up over the last couple of years, Veritas manages to sound just different enough to keep your interest. Soaring guitar work over solid rhythm sounds, a tight bass and those aforementioned drums add to the musical style. The current line-up of the band includes Denny Anthony on Vocals, Greg Wenk on Guitar, Geno Alberico on Bass and Marc Zonder, (ex Fates Warning), as guest drummer. I suppose this means Marc’s not available for touring, but you never know. He replaced Adam Hartley, who had to leave the band for personal reasons. The band is based in the US, and come from Kansas and have existed in one form or another since 2012.

When looking at the tracks, I think I found them equally as good as one another, but I enjoyed Frail for its vocals and guitar, Sacrament for its intro and Love and Burn for the whole song – which seemed to incorporate a mix of 80’s and 90’s style vocals that made me think of Sabbath and Whitesnake, (I have a weird brain – forgive the analogy).

To be honest there isn’t a weak track on the album. It’s very polished, has some great tunes and is one of those albums you will keep coming back to.

It’s available to listen to on Spotify, Deezer, Amazon Music and can be ordered on CD from Amazon or through their website: https://veritas.rocks/shop . It’s currently just under over £11 with delivery in the UK.

I loved it. I will give it a rocking 8/10 – which is something I rarely do for a first album.