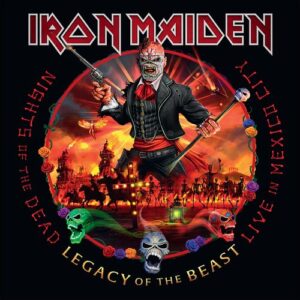 I’ve seen Maiden a few times now, so you could possibly say that I am a fan. As a fan, I am not exaggerating when I say that this is one of the best live albums the band has ever produced. As a writer though, I should explain how I came to this conclusion.

Released on November 20th, this album was recorded live in Mexico during September 2019 and was announced in October 2020. Like many of their previous live albums, (and there have been 13 of them up until this point), this comes at the end of one musical chapter and the beginning of another. It is also one of the first modern live recordings to include songs from the Blaze Bayley era of the band, which was actually one of the reasons I got into Iron Maiden in the first place.

Bayley started his career off in a local band called Wolfsbane as the lead singer. Wolfsbane supported Iron Maiden on their No Prayer for the Road Tour in 1990. In 1993 Bruce Dickinson left Iron Maiden and Blaze was chosen from hundreds of auditions. Unfortunately Wolfsbane disbanded straight after and I decided to start following Maiden instead. It took me a while to catch up with the back catalogue, but by the time I did, Bruce Dickinson had re-joined the band and I was hooked.

Back to the present and I have to say, as they have so often done in the past, Iron Maiden once more delivers a cracking live recording. Put on some headphones, close your eyes and you can feel yourself surrounded by thousands of Mexican’s roaring and singing as Maiden goes through their set.

This is a set that covers songs that haven’t been sung live on stage since the 1990’s. You have “The Cross” and “The Clansman”, (as mentioned earlier), from the Bayley era, blended in with classics like “The Trooper”, “The Wickerman”, ”Aces High” and “2 Minutes to Midnight”. Then there’s “Run to the Hills”, “The Number of the Beast” and the slightly more recent “Flight of Icarus”. All of them belted out by Dickinson’s soaring vocals and backed by the tightest live sound I’ve ever heard.

The energy in this album carries through to the listener. Trust me when I say I started listening to Churchill’s Speech at 3am in the morning and didn’t go to bed until the set had finished. I couldn’t. It brought me back to my youth, when I didn’t need a stick to walk, and had hair long enough to mosh with.

If you are an Iron Maiden fan, and you were due to see them performing live this year, but missed out due to the current world crisis, then get this album. Hell, get it anyway. Unlike previous live releases it covers songs from 4 decades of Iron Maiden and should not be missed. It’s an energetic 8/10.